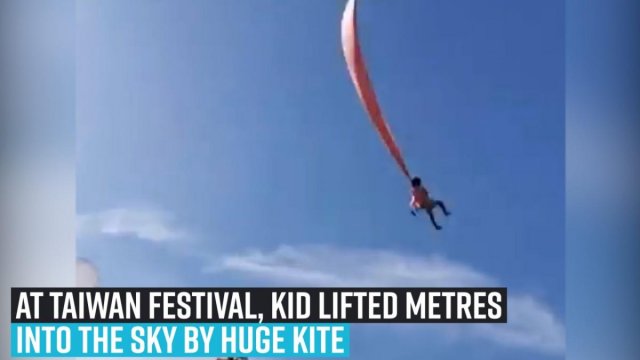 At Taiwan festival, kid lifted metres into the sky by huge kite

At Taiwan festival, kid lifted metres into the sky by huge kite

In a shocking and horrifying incident, a three-year-old girl in Taiwan was dragged by a huge long-tailed orange kite up in the air. The child had a lucky escape after being lifted several metres into the air for over a minute. She was caught in the strings of the kite which was being flown during the Kite Festival in the seaside town of Nanliao on Sunday, August 30. Horrified onlookers at the spot managed to rescue the girl child, who suffered a few scratches in the face and on her neck.

The crowd, which was initially cheering the kite first taking flight soon turned to screams of horror when they saw the little girl soaring with it in the sky. The unidentified girl was taking part in the kite festival when she got entangled in the giant kite that was hoisted off the ground by several metres.

The video of the incident went viral on the internet soon after as several onlookers posted it on their respective social media accounts. The video shows the girl getting twisted along with the kite several times while it was in the air. According to several media reports, the girl was frightened though she landed unharmed finally.

Following the incident, the mayor of Hsinchu city, Lin Chih-Chien, tendered an apology to the public in a statement. Lin said that all on-site activities were immediately suspended by the authorities to ensure the safety of the public in the high winds.

Also, the municipal authorities joined the family in the hospital, where the young girl was cleared of injuries except for some scratches on her neck. It was not clear how the toddler girl got caught up in the kite, which in the video appeared to have been wrapped around her stomach.