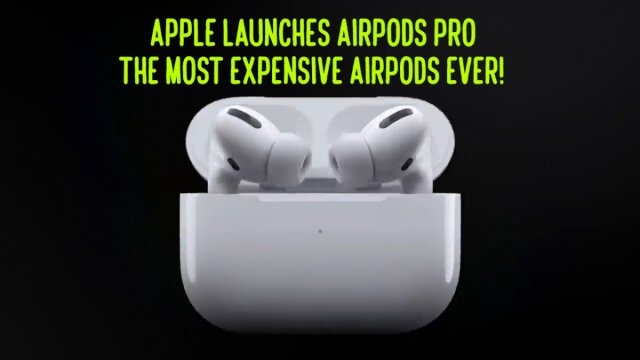 Apple launches AirPods Pro, the most expensive AirPods ever!

Apple launches AirPods Pro, the most expensive AirPods ever!

Apple will start taking orders for its much-anticipated Mac Pro from Tuesday, December 10. The tech giant sent a "save the date" e-mail to its customers which can be termed as an informal announcement. The company had first announced the Mac Pro in June.

This also brings an end to speculation over the price of the desktop. The super-pricey Mac Pro starts at whopping $5,999. Although it is still not clear how long it will take the units to reach customers after they place their orders but it is likely that the company will try to start deliveries by Christmas. However, the company's website still shows the products as "coming soon"

Apple in November had said that it will launch the much-anticipated Mac Pro by December. However, Mac Pro doesn't come with a display, so Apple will also be selling its 6K Pro Display XDR, which will also be available for orders from the same day.

Mac Pro was always going to be pricey product, much like Apple's other offerings. However, given that it doesn't include a display, consumers will have to buy the 6K Pro Display XDR, which comes at a staggering $4,599. That takes the entire product's pricing to almost $11,000. And once the upgrades start coming in, the price will start escalating further.

That said, Apple is not aiming to lure the regulars with Mac Pro. Instead, it is targeting professionals who make movies and those edit music for films.

Apple launching a desktop may have come as a surprise to many when the tech giant first announced the product earlier this year. Understandably, it's a strategic move as the company with Mac Pro will try to lure back professionals who have switched over to Windows.

Apple's chief executive officer Tim Cook in a statement in September had said, "The Mac Pro is Apple's most powerful computer ever and we're proud to be building it in Austin. We thank the administration for their support enabling this opportunity."

Moreover, Mac Pro will be assembled in the company's Austin facility. The decision was taken after Apple won tariff reliefs on some components that it has to import from China.

Mac Pro has also been tweaked since its announcement. It can now be ordered with an optional 8-terabyte solid-state drive option, with twice as much memory as previously stated. Apple spent almost an entire year in revamping its lineup of Pros. This also includes a 16-inch MacBook Pro with an all-new designed keyboard, improved battery and speakers.