Local authorities confirmed that at least 32 Palestinians have been killed by Israeli strikes on the Gaza enclave. 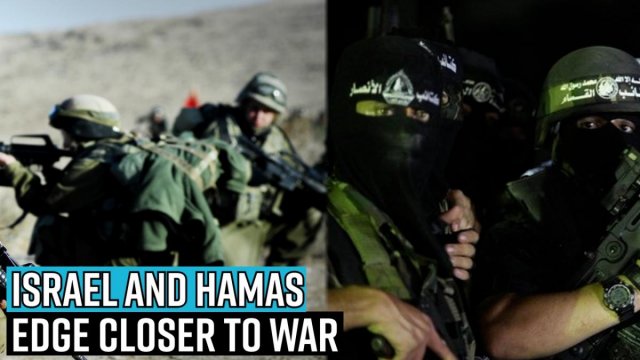 Palestine militant group Hamas fired a barrage of rocket at Israel's commercial hub Tel Aviv on Tuesday night in retaliation to an Israeli strike on Gaza that destroyed two buildings, killing dozens, in one of the deadliest fire strikes between the two enemies. On Wednesday, Hamas confirmed firing over 200 rockets into Israel killing at least five as tensions escalated overnight.

Israel's Iron Dome rocket defense system so far has struggled to intercept the rockets. The world woke up to the shocking footage of the aerial strikes from Gaza on Wednesday that has now compelled Israel's transportation authority to close down the country's main international airport.

Hamas confirmed on Wednesday that the rockets were showered on Israel in retaliation to the air strikes that destroyed two towers in Gaza earlier in the day that killed at least 32 Palestinians in the blockaded Gaza Strip and wounded hundreds more.

The armed branch of Hamas released a statement on Wednesday saying that it was "in the process of firing 110 rockets towards the city of Tel Aviv", and 100 rockets towards the southern town of Beersheva, "as reprisal for the restarting of strikes against civilian homes".

Following the release of the statements sirens rang out in both Tel Aviv and Beersheva as citizens panicked and rushed out of their homes toward bomb shelters, Israel Defense Forces confirmed. Hamaz had earlier hinted at retaliating after it confirmed that air strikes from Israel destroyed a nine-storied building they control in the heart of Gaza.

Following Israel's attack the country's Defense Minister had said, "This is just the beginning" of Israel's strikes. Hamas leader Ismail Haniyeh vowed that "if Israel wants to escalate, we are ready for it."

The barrage of rockets fired at Tel Aviv has killed at least one in the outskirts of the city, while several have been seriously wounded and building have been damaged in large scale. Since Monday three Israelis have been killed and dozens of others injured in rocket strikes from the Gaza Strip.

On the other hand, local authorities have confirmed that at least 32 Palestinians have been killed by Israeli strikes on the enclave, including 10 children. Also, more than 220 have been injured. According to local media reports, Israel has been using its Iron Dome rocket defense system to intercept many of the 200 rockets so far but even the system seems to be overwhelmed with the huge barrage of rocket show.

Shocking footages of a salvo of rockets showering on Tel Aviv has since gone viral on social media, with most fearing that the tensions could further escalate between the two foes. Following the first series of rocket attacks, authorizes have closed down Tel Aviv's international airport.

The transportation authority said there would be no outgoing flights to allow the defense of the country's skies. The air strikes carried almost throughout Tuesday is likely to continue given the escalating tensions in contested Jerusalem over the past few weeks. Tuesday's strikes appeared to be some of the most intense fighting between Israel and Hamas since their 2014 war.

Read more
This article was first published on May 12, 2021
Share
Why advertise with us
READ MORE