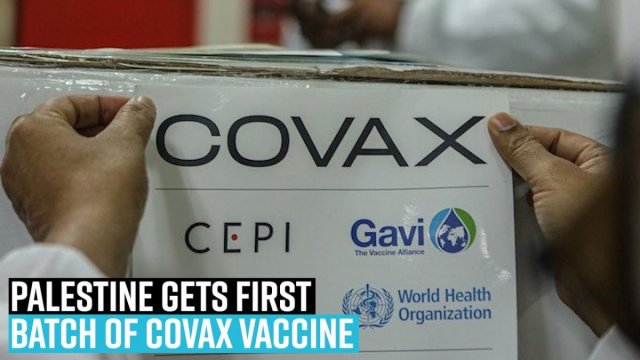 After weeks of uncertainty, Palestinians have received the first batch of vaccines from the global COVAX sharing initiative. The Palestine Authority said on Wednesday the arrival of the shipment will boost vaccination efforts in the occupied West Bank and Gaza.

'Vaccine disparity' in the region had come into sharp focus after Israel vaccinated its entire population in a short span of time while the neighboring Palestine fell far behind in achieving inoculation targets. One third of the consignment would be allocated those in Hamas controlled Gaza.

According to a Palestinian Health Ministry spokesman, 38,000 doses of the Pfizer/BioNTech vaccine would be distributed by Sunday. Some 24,000 doses of the AstraZeneca vaccine also be kept ready the approval from the World Health Organization, Reuters reported.

In the latest report, the Bank suggested that Israel could consider donating surplus doses to the Palestinians. "In order to ensure there is an effective vaccination campaign, Palestinian and Israeli authorities should coordinate in the financing, purchase and distribution of safe and effective COVID-19 vaccines," the World Bank said.

Though rights groups have criticized Israel for allegedly ignoring its duty to vaccinate people in the occupied areas, Tel Aviv has said that as per the Oslo peace accords, Palestine's health ministry holds the responsible for vaccinating people in Gaza and the West Bank.

However, the Palestinian Authority said in early March that it reached an agreement with Israel under which the Jewish state will vaccinate over 100,000 Palestinian laborers with Israeli work permits. The decision came after a rights group said that Israel hadn't done enough to safeguard Palestinians in occupied territory.

Palestinians who work in the Israeli service and industrial sectors were receiving vaccine doses but they are mostly being given privately by their employers inside Israel. However, following the agreement, the vaccination drive would be initiated by Palestinian medical teams that would administer shots at West Bank military checkpoints, reports said.

According to the WHO, further COVAX shipments to Palestine are expected in a few months. Reuters reported that the vaccines, which were brought into Tel Aviv's Ben Gurion airport were transported to the Palestinian city of Ramallah in the West Bank in trucks.

The Palestinian Authority says it plans to administer vaccines to about 20 percent of the Palestinian population through the COVAX program. In the initial phase, health workers, cancer and kidney patients will be covered, as well as those aged above 75.

Read more
This article was first published on March 17, 2021
Share
Why advertise with us
READ MORE