The defence budget for 2020 hit $48.5 billion, marking the sixth straight annual rise in the outlay. 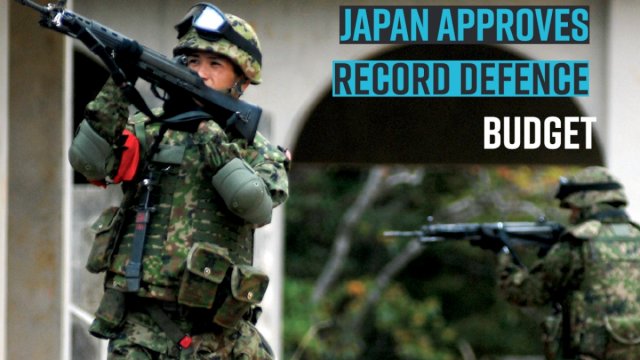 The Japanese government approved a record defence budget on Friday amid the concerns over missile and nuclear threats from North Korea as well as China's military expansion and maritime aggression. The defence budget for 2020 hit 5.31 trillion yuan ($48.5 billion) as per the draft document reproved by the government on Friday. The rise in outlay this year is pegged at 1.1 percent and it is the sixth year in a row that Japan has raised the defence budget, the Japan Times reported.

The budget also includes provisions for hosting US military bases in the country. Tokyo said that about 12.9 billion yen will be spent on buying the vertical launching system for the U.S.-made Aegis Ashore land-based missile defence batteries. This will help Japan stave off adventurism from North Korea. A massive chunk of the defence outlays for the next year is earmarked for improving outer space capabilities. As much as 50.6 billion yen will be spent on developing space warfare capabilities. Besides ally United States, countries such as Russia and China have made significant progress in this field in recent years.

In big-ticket military procurements slated for the next year, Japan will buy 9 Lockheed Martin F-35 stealth fighters from the US. This includes six short take-off and vertical landing (STOVL) B variants it wants to fly off aircraft carriers for as much as 107 billion yen, Reuters said.

Japan also plans to buy a new generation of missiles designed by Raytheon to beef up the ballistic missile defences that can shoot down incoming warheads in space. The outlay for this project is about $1 billion.

The shift of focus to cybersecurity and outer space capabilities follows the national defence guidelines adopted in December last year. The document had said the focus on these sectors was needed to "fundamentally change the existing paradigm of national security."

Under Prime Minister Shinzo Abe, Japan has been veering away from the tightly held conventional approach to military upgradation. The defence budget has increased by almost 15 percent in less than a decade. Though the post-war constitution of Japan forbids the possession of offensive weapons, successive Japanese governments have re-assessed the countries security threats and tweaked the self-defence principles from time to time.

Here's a look at the slow and steady evolution of Japanese pacifism over the years.

The post-war Constitution, which was drawn up when the country was under the US occupation, limited the use of force only as a means of self-defence. The crux of Japan's pacifist stance was that the country will refrain from using force to resolve international conflicts. This essentially ruled out military alliances and intervention in regional military conflicts.

The tinkering of Japanese pacifism started in the early 1950s when the US nudged Japan to 're-arm' as it looked to bolster its position during the Cold War. As the Korean War erupted the US withdrew its forces from Japan, leaving the country with no military to protect itself from any possible invasion. Then, under the behest of the US, a 75,000-strong National Police Reserve (NPR) was formed in Japan to fill the military vacuum.

Emergence of Mao and the communists in China

The regional balance had significantly changed from 1945 with Chiang Kaishek losing the Chinese civil war. The emergence of Mao and the communists in China meant that America lost another regional ally, and this was at the root of US rethinking on Japan's total pacifism.

Prime Minister Yoshida did not give in to pressure to form a military force for self-defence and take on bigger stakes in the region but eventually, in 1952 a new National Safety Agency was set up to oversee the NPR.

As per the post-war Constitution, Japan was never to have a regular army, navy or air force and hence the NPR was seen merely as an extension of the police force. However, the National Safety Agency eventually became the Japan Defence Agency or the Ministry o Defence. In 1954, the National Police Reserve became the Japan Self-Defense Forces but Yoshida made sure the forces were minimalist.

In the 1970s US President Richard Nixon renewed US pressure on Japan to assume a bigger regional role. In 1983, Prime Minister Yasuhiro Nakasone wanted to make an 'unsinkable aircraft carrier' triggering protests. Also under his rule, Japan breached for the first time the de-facto military spending limit of less than 1 percent of GDP.
Nakasone also cut a new path, allowing the export of military hardware to the US.

Japan spent $13 billion in the war but with no active military participation, setting off debate over the country's efficacy in strategic interventions, this time the oil supplies. The call for becoming a 'normal nation' gained more traction.

Japan initiated a plan to build a ballistic missile defence system (BMD) with US cooperation after the 1998 North Korea missile tests. In 2003 Prime Minister Junichiro Koizumi proclaimed BMD a national priority. In 2001, in a minor yet symbolic departure from the stance during 1990-91 Gulf War, Koizumi decided to support America's war on terror following the 9/11 al-Qaeda attack, by sending forces to the Indian Ocean.

In 2007, marking the 60th anniversary of the Japanese Constitution, Prime Minister Shinzo Abe called for a "bold review" of the charter that paved the way for Japan's greater role in regional and global security. Under Shinzo Abe again, in 2014 Japan ended a ban on its armed forces abroad. The ban had been in place since 1945. Ending military seclusion by approving collective self-defence meant that Tokyo can extend military support to a friendly country under attack, something which it had been proscribed from doing for decades.